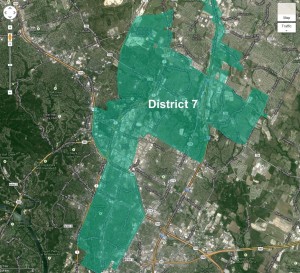 by Tom Linehan, The Allandale Reporter

District 7 is shaped like a pork chop! Looking at the final draft of the city council redistricting map drawn up by the Independent Citizens Redistricting Commission (ICRC), the bulk of Allandale is in District 7 whose boundaries form a narrow band north of 45th Street between Lamar and MoPac up to 183 where it then expands west of MoPac, and a little further north of that it extends east of I-35. The northern boundary of the district goes up to Howard Lane and parts of it to Wells Branch Parkway. That’s pretty far north and the northern section comprises a large section of District 7.

The portion of Allandale not in District 7 is the small area between 45th Street and Hancock, west of Bull Creek. It is in District 10. That means Allandale will have two city council members to influence. It also means two council members invited to march in our annual 4th of July parade.

The first map the ICRC created had District 7’s boundaries stretching down to Lady Bird Lake west of MoPac encompassing Tarrytown. Gerrymandered you say? Well, after asking around, I am left with the impression that the shape of District 7 in the preliminary map released September 28 came about more because all of the other districts were drawn first and district 7 was what was left. That’s not exactly what happened, but close. The initial map had District 7 spanning Lady Bird Lake north to Pflugerville.

So the question now is whether Allandale’s interests are better aligned with the folks in Tarrytown or our northern neighbors? Most of the Allandale people I spoke with who were active in the process, prefer sharing the district with the suburban neighborhoods north over the more urban, near downtown neighborhoods south, however Allandale’s primary interest throughout the process was to be in the same district as our close-in neighbors. That is what the Allandale Neighborhood Association’s (ANA’s) redistricting committee and other interested Allandale residents told the ICRC in response to the initial map. Chris Hayden, chairperson of that committee, submitted ANA’s resolution and spoke in support of it at one of the ICRC public meetings. The resolution conveyed ANA’s preference to be aligned with neighborhoods like Brentwood, Brykerwoods, Crestview, North Shoal Creek, Oakmont Heights, Ridgelea, Rosedale, and Wooten. When the ICRC came out with the second draft of the map on November 6, it appears they listened. The southern border of District 7 was cut off at 45th Street. Tarrytown was moved into District 10.

To elaborate on why the preference for aligning with neighborhoods north of us over the ones south, Steven Zettner, who was involved early on in rallying interest in the redistricting process said: “Our neighborhoods are early suburban, and infill development here has different requirements from downtown.” The desire, he explained is “a council district where the council member could specialize in early suburban challenges, undistracted from the different challenges faced by areas in or near downtown.” Some of those challenges that came up in my talk with Steven and others in Allandale include the transportation corridors along Burnet Road and Lamar Boulevard, in-fill development (probably the most complex challenge of them all), preserving family-friendly neighborhoods, and maintaining an age- and income-balance.

As ANA’s president, David Mintz, pointed out, “the district boundaries that the city council approves will shape our representation at City Hall for a number of years so it is important that we align ourselves with neighborhoods that share similar concerns.” David Orshalick, who was one of the more involved residents in the process, said: “We want the council member in our district to experience our pain when it comes to issues like transportation.” David was a big supporter of single-member districts. “Representation at City Hall,” he says, “should be much more neighborhood friendly going forward because council members will be elected from all areas of the city and not just from the central city.”

Those close to the process are generally pleased with the outcome of the redistricting maps. While Allandale is not in with all of the neighborhoods it originally wanted, specifically the ones south of 45th: Rosedale, Brykerwoods, Ridgelea, and Oakmont Heights, it did keep a majority of them. They would have preferred the northern border to have stopped at Parmer Lane however, given all of the challenges the Commission faced making the map, one of which was having roughly 80,000 residents in each district, no one could offer a better alternative.

Now that the districts are drawn, let the council candidates come forward. We have much to discuss. Allandale is being asked to put together a neighborhood plan. There are concerns about a Burnet Road bar district. We want to know how the rewrite of the Land Development Code is going to affect our SF-2 zoning? Is a pedestrian, family-friendly Burnet Road an oxymoron? Bring ‘em on! Who is ready to run for city council office in the pork chop District?