Since the dawn of time and until the 20th century, communities were fully-integrated by age. In fact, anthropologists have concluded that human longevity reflects the positive influence of grandparents in raising the young and sharing wisdom in community decisions. Age balance, in short, was a survival trait.

Perhaps that would be too far a stretch in modern society, but my observation is that places mixing the young, the old, and the middle-somethings are more stable. Young adults and seniors have disposable income to support local restaurants, or Austin’s live-music scene. Sales tax from those businesses goes into public services, including schools.

Households with children support a whole other segment of the economy – daycares, music and dance lessons, tutoring services, summer camps, pediatricians, ice rinks and bowling alleys, and of course – schools. In Allandale, where I live, many of these services are provided by seniors who raised their kids here before us. Strong schools buoy property values. Families, like other long-term residents, invest time and money in their communities. People of parenting age are frequently the middle managers companies need to temper creativity with experience.

In short, a community of mixed ages supports a diverse economy, which is buffered when things turn down, like in 2008.

Austin’s current policies undermine age balance in the urban core, by excluding children.
Many policymakers assume that the main reason central Austin has been losing children is affordability – that housing near Downtown is just too expensive for families.

But affordability is only half the story. Austin’s new housing concentrates efficiency and one-bedroom units, in apartment complexes with few child-friendly amenities. It’s more common for urban apartments to market themselves as “dog-friendly” than “kid-friendly.” Small apartments are highly affordable for young singles or couples – we do need them. But their concentration, and the resulting singles-focused services, leaves little to attract families. On Burnet Rd, for instance, none of the 175 residences at the 5350 Burnet AMLI property are 3-BR. Most are 1-BR. The artificial concentration of childless households is drawing requests for late night bars that, cumulatively as a late-night bar district, will disrupt the lives of adjacent long-term residents.

A study by the community organization Sustainable Neighborhoods of North Central Austin (SN) found a medium to strong correlation between multi-bedroom housing, and the percentage of children. The study evaluated ACS 2011 census data for over 300 neighborhoods in eight US cities. 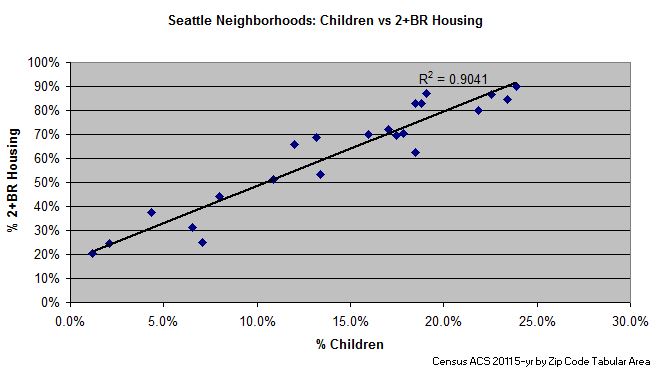 To achieve even the US average of children in the population, which is 24%, the SN study found that a community needs to have at least 75-80% dwelling units with two or more bedrooms. For comparison, Downtown Austin has 41% multi-bedroom units, and just 3-4% children.

Not every Austin neighborhood needs to be age-balanced. But where neighbors like in District 7 are demanding it, the City of Austin needs to adjust its policies to enable this goal. A Council member who understands and champions this policy would go a long way.