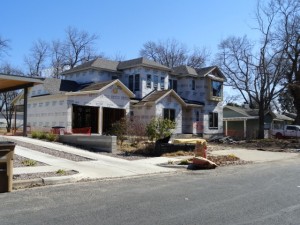 If you do not change direction, you may end up where you are heading.
Lao Tzu

The rewrite of the City’s Land Development Code could mean changes for Allandale. Our neighborhood is predominantly zoned single-family, SF-2, and our average lot sizes are larger than most Austin central city neighborhoods. If the goal for the City as presented in the Imagine Austin Plan is for a compact connected city, SF-2 zoning may be a thing of the past. My guess is it will be replaced with something less restrictive. This may not be a bad thing especially for those of us whose property taxes are rising faster than our paychecks. My fear is that unless we open the neighborhood up to more housing options, Allandale will evolve to become a high-priced exclusive neighborhood. I would prefer that it remain, and further evolve into, a mixed-income, mixed-age neighborhood.

Yes I know I am free to move out of the neighborhood if I am not happy here but hear me out. First, the threat of the Land Development Code rewrite that supports greater density is real. A recent Community Impact article quoted Dan Parolek, principal at Opticos Design Inc., the firm that is leading the code rewriting process, as follows: “This is really about coding for a compact, connected Austin, which is the goal that [residents] have established in the Imagine Austin plan.”

Allandale is not compact. An analysis of neighborhood density produced by Ryan Robinson, Demographer for the City of Austin, in November 2005, showed Allandale as one of the least dense and slowest growing neighborhoods in the City. Even though the analysis is a few years old, I doubt the neighborhood’s density has changed much even if you consider the 175 apartment units the AMLI 5350 development on Burnet Road added to the mix. An update on neighborhood density will likely come out of the City’s CodeNEXT process. CodeNEXT is the name given to the City’s initiative to revise its Land Development Code. Project staff are currently documenting the features of Austin’s 103 neighborhoods.

The rollback was voted on and approved by the Austin City Council 6-1 under Mayor Carole McClellan in 1981. Mayor McClellan was the lone vote against it. The rollback was the largest zoning rollback in Austin’s history. As a result of it, much of Allandale’s interior is currently zoned SF-2, the City’s base zoning for single family, standard lots. Under that zoning, duplexes, townhomes, and multi-family uses are not allowed. Allan McMurtry, the person who took the lead on the rollback, recounted what it took to make it happen in an article he wrote for the “Allandale Neighbor” newsletter in 2007. You can read it here. It was an unprecedented accomplishment, the result of many volunteer hours from a dedicated group of residents looking to preserve the neighborhood’s property values and character.

I may be wrong about the outcome of the Development Code rewrite and its impact on our neighborhood. Whether it is called SF-2 or something else, the City’s “place-based” approach to zoning with the rewrite of the Land Development Code may end up preserving Allandale as a predominantly single-family unit, standard lot neighborhood. It is certainly one of Allandale’s unique characteristics. Under this scenario single family homes will continue to be all that you see in the neighborhood’s interior; any additional housing units will be built along the Burnet Road and Anderson Lane transit corridors as apartments. That is what was behind the City’s Vertical Mix Use (VMU) push in 2008. (You can read more about VMU and Allandale here.)

I am not sure this was the future envisioned by the neighborhood association when it pushed for the zoning rollback 33 years ago. That rollback has certainly served the neighborhood well all of these years but it may be hurting us going forward, and it is doing nothing to ease the City’s affordable housing problem. Upper-middle-class families will be able to buy and remodel existing homes or replace them with larger homes in Allandale. Young, single professionals will have $1,500 a month appartments to rent along Burnet Road, but what about middle class families? Will there continue to be a place for them in Allandale, or in Central Austin for that matter?

This concern about successfully preserving a single-family standard-lot neighborhood for middle class families is real. In the business news this past week, athenahealth signed a lease for office space at the former Seaholm Power Plant property downtown promising to create 600 jobs with an average salary of $132,000 over the next 10 years. Those are the kinds of salaries that will be needed to cover a mortgage on a house in Allandale, provided it is a two-income household. Websense, a San Diego-based technology company, is looking to relocate in Austin. They project creating 470 jobs with an average salary of $82,000. Another technology company, Dropbox, has an office in Austin and is looking to expand, adding another 170 jobs.

With more high-paid workers and the demand for housing outpacing supply, Austin could experience a variation of the class battle the San Francisco Bay area is going through now. The following is from a February 2014 Time magazine article, “San Francisco’s New Disruption,” by Katy Steinmetz:

Class tensions have settled over life in San Francisco like a dreary fog. Teachers, cooks and musicians are packing their bags as high-rises with two-bedroom apartments renting for $6,000 per month open their doors. A combination of exploding wealth and limited space has led to an affordability crisis.

We would all like to keep our teachers, cooks and musicians in Central Austin closer to their work and play, but current zoning laws that limit density will continue to make that difficult.

Austin is missing “middle housing.” The CodeNEXT presentation delivered at the listening sessions held around Austin in January (click here) points to “missing middle housing” as one of the culprits of the City’s housing affordability problems. In the presentation it was pointed out that Austin has single-family detached units and large apartments but very few middle housing units like duplexes, garage apartments, triplexes, fourplexes, townhouses, row houses, and courtyard apartments. That does not mean those types of units don’t exist here, there just are not enough of them. This is certainly the case in Allandale.

Limited housing choices hurts affordability. According to a recent article in the Austin American-Statesman, “An economic divide: As Austin’s mixed-income neighborhoods disappear, economic opportunities could suffer,” by Dan Zehr, the only neighborhood with a mix of housing for mixed income residents is the Mueller housing development, which came about as a result of the City’s direct involvement in the shaping of that development.

If we want to see more affordable housing closer in, the City will have to change the land development code to allow more mixed housing options, otherwise the only new construction in Central Austin neighborhoods like Allandale will be bigger homes replacing smaller older homes and the makeup of the neighborhood will consist predominantly of people who can afford bigger homes, individuals who rent rooms in stealth dorms (they’re not just for students), and older residents who bought their house years ago and can survive the tax increases.

The following posting went out to the Allandale list-serv recently:

Hi neighbors,
My partner and I have been living in Allandale for the past year and hope to stay in the neighborhood or anywhere near.
If you have a garage apartment or house for rent as of March 1st or March 15th, we would love to speak with you.

We are respectful tenants with good references.
Thanks,

I hope they find something but I am not optimistic. To start, there are not many detached garages north of Allandale Road. Most of the garages in that part of the neighborhood are attached garages. SF-2 zoning also does not allow garage apartments. Any of the ones you see are ones that were in place prior to the rollback. I would like to see this changed. My wife and I bought a small house in nearby Brentwood a couple of years ago with a garage apartment. We rent the two out and it has worked out well for all concerned. There is a young professional couple that lives in the house and a young student couple that rent the garage apartment in back. They like the location, the neighborhood, the fact that its affordable, and they like having a yard. And, if I were their neighbor, I would like having younger folks around. I have concluded from this one experience that there is demand for such housing, but you won’t find it in Allandale.

There is something appealing to living in a mixed income mixed age neighborhood. I think this has been one of the draws for people moving to East Austin. Allandale is not a mixed income neighborhood nor has it ever been due largely to its SF-2 zoning. What I see evolving is a gentrification of Allandale with middle-class families gradually being replaced by upper middle income people who can afford to buy a house here.

Another way to add more housing is to create smaller lots. That however is difficult to do in Allandale as well. Many of the deed restrictions in the neighborhood prohibit it. It is not impossible, just risky. If someone wants to buy a house and subdivide the lot, they risk a challenge from their neighbors, sometimes in court, for violating the subdivision’s deed restrictions.

According to a recent Stanford study, Austin ranked ninth highest in income segregation among the 100 largest metro areas. I bring this up because income segregation has a lot to do with zoning. For me it is a quality of life issue. I would prefer living in an area where there are mixed age mixed income families than one that is homogeneous. I think that is one of the driving forces behind the growth surge in East Austin.

Most of Austin’s Central City neighborhoods have gone through the City’s neighborhood planning process where they have carefully reviewed and made decisions about future land use within their borders. The outcome of that effort is a Neighborhood Plan. Allandale has yet to go through that process but I imagine it will take something like it for the neighborhood to reconsider its predominantly SF-2 zoning, and that assumes those decisions will be available to us following the Land Development Code rewrite. I am aware that the Allandale Neighborhood Association has recently formed a Land Development Code committee but I do not know what the objective of that committee is.

Thirty-three years after the passage of the biggest zoning rollback in Austin’s history, it may be time to revisit Allandale’s single-family, standard lot (SF-2) zoning. Opening the neighborhood up to middle housing options like garage apartments, duplexes, or other housing types may serve current and future residents better. It is also time to reconsider lot sizes. Allandale is a great neighborhood thanks in part to the SF-2 zoning we have come to rely on all of these years; however, where we are today and where we are headed is keeping affordable housing options out of the reach of many families and turning Allandale into a neighborhood for the rich.