Traffic congestion brings Austin to a grinding halt about five days a week. The waste in time, money, health, and quality of life is enormous.

Like most cities around the country, the City of Austin has rejected a suburban growth model in favor of an infill growth model. Policy debates are no longer about the choice between highways or transit, but about what transit modes, and where to put them.

East-West Connectivity. North Austin between 45th and Pflugerville has congestion in all directions – north and south, but also east and west. Not as many trips go east-west, but those that do get packed onto fewer routes.

Transit planners, while acknowledging east-west connectivity as an issue, have decided as part of their CapMetro Project Connect North Corridor plan to focus limited resources reducing north-south congestion, in support of Downtown Austin. In addition to the existing commuter rail line and two new rapid bus lines, two express bus routes from the Round Rock area are possible.

This total commitment to Downtown means east-west congestion in North Austin will go unaddressed. What’s disconcerting is that these plans extend out 30 years. That means no serious rapid transit options to address congestion and added density on Anderson, Rundberg, Braker, Duval, or Parmer. CapMetro’s plan conflicts with the City of Austin Growth Concept Map, which shows rapid transit options on Rundberg, Braker west of Metric, and Parmer, though not Anderson, or the rest of Braker.

Anderson Ln faces the biggest risk. It is a large commercial area zoned and ripe for redevelopment. Yet there is no guarantee that the Lone Star rail line will put a station there. And neither the City of Austin nor CapMetro proposes to support it with an east-west rapid transit route. 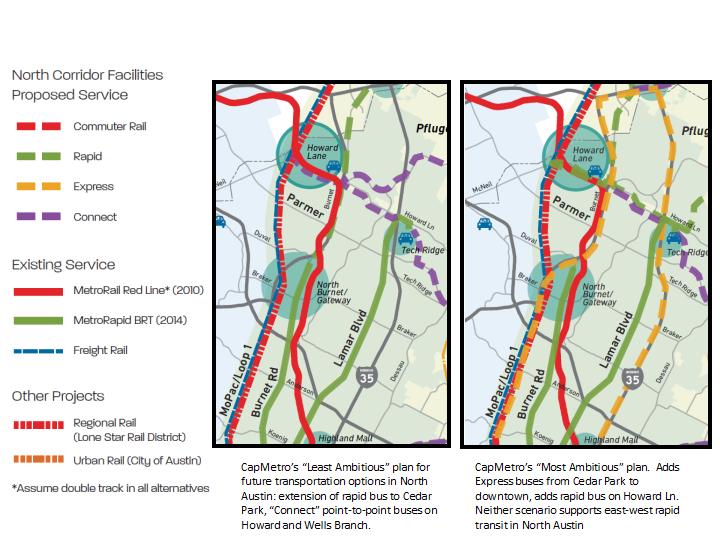 Pedestrian and Driver Safety. N Lamar Blvd above 183 suffered 770 accidents over a two year period, and Burnet Rd had 440 accidents, according to the Lamar-Burnet corridor analysis.

Highways. Mopac, 183, and I35 all suffer chronic congestion, especially at exchanges. Projects are underway for all three.