All eight candidates running for Austin’s Council District 7 seat pledged to respect existing neighborhood plans during upcoming planning of the Burnet and Anderson transit corridors, at a forum for the lower half of the district held on Friday. Much of the forum was spent discussing aspects of the process, which revealed at least one jaw-dropping surprise and several platform inconsistencies.

Crestview Neighborhood Association hosted the Lower District 7 Neighborhoods Forum, attended by about 225 people. The event was sponsored by Crestview, Wooten, Brentwood, North Shoal Creek, and Allandale neighborhood associations. The forum was taped and the main part is available here.

Affordability was the first question posed, and candidates provided a number of policy options to address it. By this point in the campaign, candidates have borrowed heavily from each other and are proposing a lot of the same things. But candidates vary in what they emphasize.

Ed English, Jimmy Paver, and Zack Ingraham have spent relatively more time on budget cuts or audits, while Melissa Zone and Jeb Boyt have pushed things like commercial property sale disclosures that would ensure commercial property owners pay their fair share of taxes. Boyt has remained consistent in pushing for new development to get housing costs down. Zone has called for developers to pay more of the cost of public infrastructure that supports their projects, especially in suburban areas.

Leslie Pool, who earlier in the campaign had focused heavily on lobbying the state for reform of the commercial property tax rules, raised several additional tools on Friday, including cost control. “I’d work to keep our bond indebtedness down. This needs to be balanced between getting projects done that we need in the district and the city, with keeping our tax burden as light as possible.”

Four of the questions at this forum explored candidates’ positions on urban planning and transportation in the context of the upcoming Burnet and Anderson corridor plans.

Candidates described their vision and tactics for the Burnet and Anderson corridors, summarized in the two info boxes below (click on box to expand). 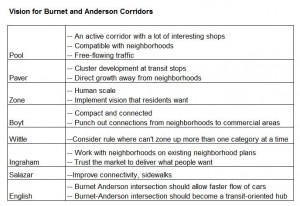 Boyt said Burnet and Anderson need both connectivity and new housing, but that connectivity needs to be addressed first. “The connections are the big problems – we’ve got long blocks along Anderson with no connections.” He offered an example – someone living near Lucy Reed school in Allandale. “Say they want to go get some Indian food at Tarka [near Anderson]. That’s only a 2-300 yard walk. But to get there they have to go all the way over to Shoal Creek, or all the way back over to Burnet Rd. This is how we get traffic.”

Paver took the opposite tack, arguing for more compact arrangement of land use into transit hubs. “There is too much scattershot vertical mixed use along Burnet Rd, along Anderson, on Lamar.” He said the City should work to direct growth away from neighborhoods, with a focus on compatibility and transit ridership. “We need to find transportation options for people, by grouping them together. If we can be sophisticated enough to move [new residents] into a particular area… then we provide them with routes that actually move them around the city.” Paver called out specific projects he would oppose – the Austin Oaks PUD and the upzoning of the Korean Presbyterian church on Justin. 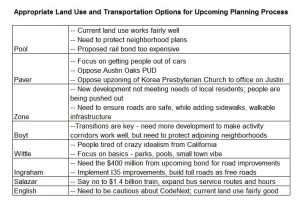 English, speaking specifically of the Burnet-Anderson intersection, proposed new intersection designs to greatly increase the flow of cars through the intersection. But at the same time, “it’s a commercial intersection, and there’s ample opportunities there to turn that into a [transit] hub,” one with convenient services, including municipal services, that keep people off the road.

Pool described her vision for Burnet as “an active corridor, with a lot of interesting shops.” But that shouldn’t result in sound, traffic or parking impacts on adjacent neighborhoods. “I see Burnet and Anderson as very active, lively areas. Any development would be compatible with established neighborhoods, stepping down to the neighbors behind them.”

Zone was careful to preface her response by recognizing the priority of residents to define their own vision. But she expressed concerns about current growth. “My vision is what you want, and we’re going to make sure that it’s at a human scale. Right now we’re starting to get development that’s right up on the roads, and it’s very high. And we’re about to get a ton of that. We don’t want that – we want air circulation, wonderful streets that are walkable – you can bike and families can enjoy it.”

Pete Salazar stuck to the practical – short-term investment in sidewalks. “I know some people from the School for the Blind. They’re waiting, and I offer to assist because there’s a giant crack there.”

A Surprise, and Some Inconsistencies

All candidates unanimously endorse existing neighborhood plans, though some candidates were harder or softer in that support. Darryl Wittle clarified that neighborhood plans should be respected “as the starting point” for upcoming corridor planning. But he said that any Council member will need to back his or her voting constituency.

That question is surprising because it would effectively preclude new duplexes, fourplexes and eight-plexes that have been a key plank of Boyt’s platform. Existing neighborhood plans don’t have much of this affordable “missing middle” housing. But they have been a constant topic from city planners as part of CodeNext and the upcoming Burnet corridor planning process.

The candidates’ strong support for existing neighborhood plans creates paradoxes for almost all the candidates in terms of their policy remarks.

What’s confusing is that most existing neighborhood plans, which for Burnet Rd describe zoning along the east side from 45th to 183, reinforce exactly the scattershot zoning of large apartments that several candidates say they oppose. The graphic below compares recent changes and their impacts for the Brentwood side of Burnet. 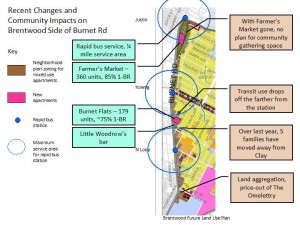 The candidates’ inconsistencies on corridor planning partly reflect inconsistencies from neighborhood activists and city planners themselves. At least three distinct visions for Burnet have been floated, described here.

Some people support the neighborhood plan approach to corridors, where big apartments are right on the corridor, backed directly by single-family or duplex housing. This approach achieves higher density – a key City goal – while still preserving core single-family neighborhoods – a neighborhood goal.

Others dismiss this pattern as “scattershot” or “tubular VMU.” The main disadvantage is congestion: more apartments are located at the extreme edge of rapid transit service areas, with fewer pedestrian amenities.  Car trips for new residents remain fairly high, resulting in traffic congestion.  Despite good intentions, the “activization” of the corridor in this fashion does result in more sound, traffic and parking impacts on adjacent residential areas.

Several candidates support adding family-friendly housing, but also support the existing land use.  English and Pool described existing zoning as “fairly good.”  The current residential zoning on Burnet results in development that effectively excludes families.  Informal reports from growth areas off Burnet south of Koenig already suggest a migration of families from Clay Ave., presumably due to expected traffic and parking issues, and the shift towards late-evening bars or restaurants.

Still another conflict involves proposals for intersections, like English’s proposal to optimize car flow through the Burnet-Anderson intersection, while also making that intersection a walkable, transit-oriented hub. It’s pretty much one or the other – you can optimize for cars, or for pedestrians and cyclists. Doing so for both, i.e. by using pedestrian tunnels or bridges, would be very expensive. City staff in the past has rejected such solutions in the Burnet area.

Lack of trust is the real driver behind neighborhood intransigence to consider new changes to corridors. This was another question raised at the forum, and every candidate but Wittle agreed with the urgent need to improve trust in order for planning to be successful.

Pool recounted the frustration of serving on citizen advisory committees at City Hall, only to be locked out of information loops by staff.

Paver in his opening remarks joked about a friend’s recent encounter with a one-legged grackle, begging for food. “The guy gives the grackle a chip. The grackle immediately drops its second leg.”

“That is how we feel in this area of town – duped by the city, in ways big and small.”