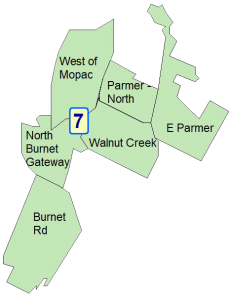 We break District 7 down into 6 communities – super-neighborhoods that share the same streets, grocery stores, restaurants, schools and other amenities.

Knowing our communities is the first step in understanding our issues, and in turn – the pros and cons of candidates.

Check to see if you’re in District 7

West of Mopac
The Milwood neighborhood can trace its history back to the village of Duval, a stop on the Mopac line founded in the 1880s. Milwood and Walnut Crossing were developed a hundred years later, and boast strong multi-generational communities. Northwood began as a small rural neighborhood in the 1970s, with other sub-divisions added since. To their north, off Howard lane near the Williamson Co. line, is the fabled Kiddie Acres. All these communities share concerns about traffic impacts from North Burnet Gateway and the new tech campuses along Parmer.

East Parmer
A stretch of mostly undeveloped land running along the east side of I-35 to Pflugerville adds flourish to the District 7 map. The main developed area is near the Dell Campus off E. Parmer, behind which are apartment complexes, the Harris Ridge neighborhood, and the northern tip of Copperfield. More suburban development is coming.

Burnet Road
Many people will recognize the Burnet Rd area from Richard Linkletter’s movie Dazed and Confused: the pool hall in Brentwood; the drive-in hamburger joint in Crestview; the baseball diamond in Allandale. It’s a leafy, early suburban neighborhood nurturing to children, cozy to seniors, and not completely stifling to young adults. More on Burnet Road

Parmer North
1970s-era Lamplight Village and tiny North Shields have seniority over the newer neighborhoods that flank them – Scofield Ridge and Scofield Farms. Many Austinites have never heard of one of our best schools – John B. Connally HS – which is in the Pflugerville school district. The school’s students reflect the diversity of the community, including many Asians who work at nearby tech campuses. More on Parmer North

Walnut Creek
The Walnut Creek area consists of quiet suburban neighborhoods interlaced with apartments, backing onto one of Austin’s best kept secrets: the Walnut Creek greenbelt. Using the creek as a hike-and-bike route into North Burnet Gateway is a priority for adjacent residents. Like other parts of North Austin, Walnut Creek is ethnically diverse. More on Walnut Creek